IN THIS ISSUE:
String Expense From the Classroom
Why Do Violin Strings Cost So Much
More Than Acoustic Strings?
by Karl Franks

A question I've been asked many times by parents who have just recently entered the violin world is "why do these strings cost so much?". It can be a little baffling to see a perfectly fine set of $13 guitar strings and then have the register ring up a price north of $50 for a set of four little violin strings. Many parents and beginning players will instinctively put the nicer strings back and instead reach for the cheapest thing on hand, which is inevitably going to be a set of steel core strings. It's understandable, and I would never expressly tell them not to buy the cheaper strings, but I do like to be able tell them why they should consider the nicer ones. With that in mind, let's go to the beginning.

The earliest known type of musical instrument string was made from the intestines of sheep (ie., cat gut). There are Egyptian hieroglyphs that lead us to believe that the practice goes back as far as around 4000 BCE. Wire, on the other hand, is a relative newcomer, as it appears to be a mere 2000 years old. Though it has been used sporadically for musical string construction through history, metal wire generally wasn't well suited for string construction for a number of reasons -- the biggest two being the amount of tension required to bring a metal string up to pitch, and the second being metallurgy. It wasn't until the industrial revolution that both our understanding of alloys and our ability to create uniform, consistent products enabled the production of a string that was at high enough uniform quality to be used as an instrument string. Even then musicians and instrument makers still preferred to use traditional gut strings. It wasn't until the second half of the 19th century when some instrument makers began to explore the use of steel strings, and even then, they had to alter the construction of their instruments to deal with the drastically-increased string tension.

Generally, when a person mentions the phrase "steel string", acoustic guitars come to mind. The steel string guitar was made popular by a small handful of American luthiers in the late 19th and early 20th centuries. By the end of the second World War it had become the norm, especially in instruments found in pop music. A plucked steel-core string has a bright sound that projects much more than a traditional gut string.

So, if steel strings give a player more volume, why are they less desirable in the violin world? There are two equally valid answers. The first is (once again) tension. The modern violin is still a product of the pre-modern world, and simply isn't designed to take on the extra tension exerted by steel-core strings. The second reason is the difference in how a bowed string functions compared to a plucked string. A plucked string has an immediate attack followed by a rapid decay. As such, a bright and loud string serves well. A bowed string is entirely different. The physics involved in bowing weren't really understood until the work of Herman Von Helmholtz in the mid-19th century. Simply put, for a violin string to sound good, it has to have both flexibility and mass. When a string is bowed, as opposed to plucked, it must sustain a much longer application of energy. (How the bow does this is a much longer conversation than we have room for, but the work of Helmholtz is always available to those inclined to delve deeper.) With this longer application of energy, overtones that might not be as noticeably present in a plucked string suddenly color the tone in a much more noticeable way.

A violin string that is overly stiff or lacks mass will have too many higher overtones and will be shrill. Steel strings by their nature lack flexibility--a problem that is exacerbated when their mass is increased. The problem of adding mass without making them entirely too stiff is overcome to a certain degree with the addition of an outer winding of aluminum, nickel or other metal. However, if the core is steel, the issues of flexibility and tension cannot be completely avoided.

As mentioned earlier, gut strings are the traditional option. However, though they are both traditional and pleasant sounding, they present other problems. Gut strings tend to be very expensive, they are difficult to keep in tune, somewhat quiet, wear out fairly quickly, and require maintenance. And, to make things worse, they require touching sheep guts every time you play. Despite this, they remained the industry standard in some form or other until the 1970s when synthetics were introduced. "Perlon" core strings were first introduced by the Thomastik-Infield company under the Dominant brand and quickly became the standard. Perlon consists of thin threads of woven nylon and is the core of modern synthetic strings (the name Perlon is however proprietary to Thomastik). Synthetic strings, whether Dominants or any of the many other brands, have the flexibility to enable the full range of overtones to be present when bowed, but lack all of the drawbacks of traditional gut. The only string that will typically have a steel core is the E, and even then, it may be wound or plated with a slightly softer metal to soften the higher overtones. The other three strings will also be wound with silver, aluminum, or another type of metal to help add mass and give the bow a suitable surface on which to gain purchase. In addition to the tonal aspects present in a synthetic string, they also are lower in tension, which is better for the instrument--and, as a side note, their stretchiness makes them much easier to tune.

So, do the differences in tone and tension warrant the additional price? Maybe not for everyone, but at a certain point in a player's development the upsides generally outweigh the additional cost of a synthetic core string. And, why ultimately do violin strings cost more than other instrument strings? In our post-industrialized world steel wire is very cheap to produce. It just costs more to manufacture a bowed string that sounds good.

Back To Top
From the Bandroom - Greenwood (AR) 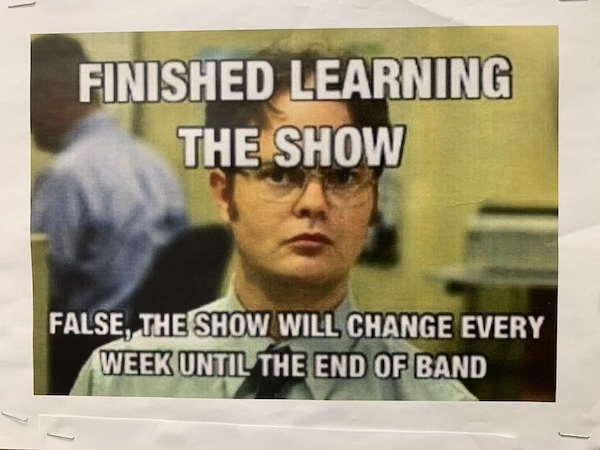